The wheels of Drupal development are turning faster and faster. Back in June, we marked the 1st anniversary of Drupal 9, and we're already talking about the upcoming Drupal 10. Yes, Drupal 10 is coming closer, while Drupal 8 hits its end of life on November 2, 2021. Drupal 7 “retires” a year later, in November of 2022. We do not know all the details about Drupal 10 just yet. Although we are sharing what we do know about its expected release date, and why it is coming so soon. We will talk about the new features it is likely to include, and what you need to consider with Drupal 8 and Drupal 7 websites in relation to their end of life..

The possible Drupal 10 release dates were known quite a while ago. But Drupal founder Dries Buytaert has confirmed them at his Drupal Europe 2021 keynote, as well as his keynote summary slides. 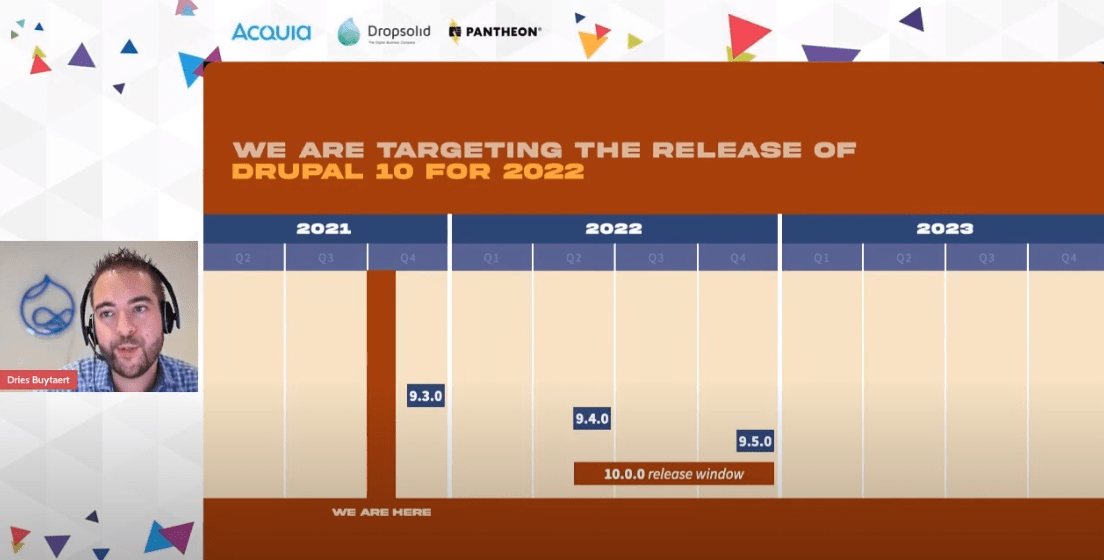 Drupal 10 release is planned for the middle of 2022 and Drupal 9 end of life - by end of 2023. A Drupal initiative coordinator Gábor Hojtsy wrote in his recent blog post, that Drupal 9 is expected to have the shortest lifetime of any Drupal major release in recent history.

The reason is very simple, says Dries. It’s because of the third-party components that Drupal depends on. These components have their own life cycle. The Drupal team usually has to change a module's version number to maintain backward compatibility. This happens anytime when a component that Drupal relies on goes end-of-life and gets a new major version. The key dependencies include Symfony, CKEditor, PHP, and Composer. 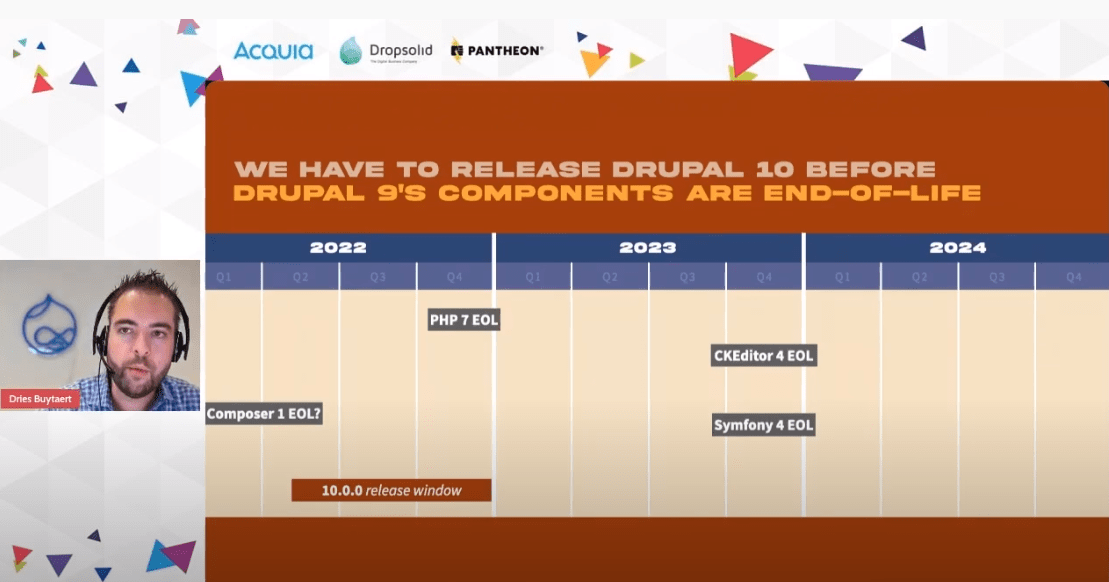 In the DrupalCon North America 2021’s keynote speech, Gábor Hojtsy shared that Drupal 10 would be a refined version of Drupal 9 including “all the goodies from all initiatives”. That said Gábor meant that it will include all of the results of all the work that the community has put in. Let’s take a closer look at some of the goodies right now!

Drupal 10 is going to have the latest third-party component versions — this is the key goal of the Drupal 10 Readiness Initiative. This means Drupal 10 websites will have all the innovations and improvements from these components. The outcome is that the websites will be more secure, better supported, faster, more powerful, and more user-friendly both to non-technical users and developers. Here are the key component changes planned: 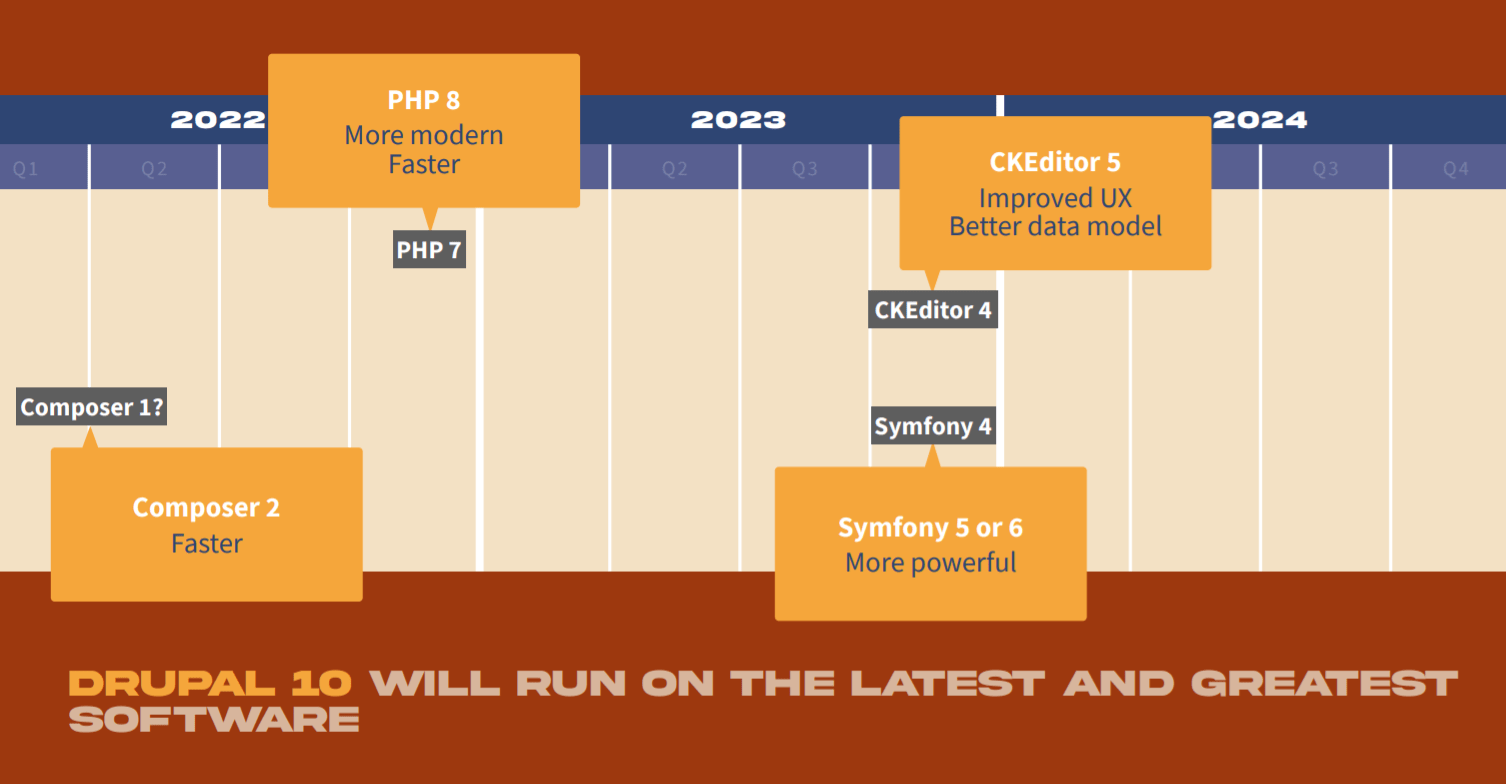 The functionality will be added to the Drupal core. It would become available out-of-the-box, but for now, there is the Project Browser contributed module in the early stages of development. Its page is equipped with the “Try it now” button. It enables you to test the Project Browser on a fresh install of Drupal, explains software engineer Martin Anderson-Clutz for Dries’ presentation.

The tool uses a new technology called DrupalPod that creates a cloud-hosted Drupal development environment on the fly. You will see the Extend tab from where you will be able to browse projects. In addition to “All projects,” there is the “Recommended projects” option. It is meant to help site builders be more confident about using vetted projects. It’s also possible to narrow the results down by category. In the future, the tool will install the modules by itself. But currently, it gives instructions to use Composer or Drush for that. 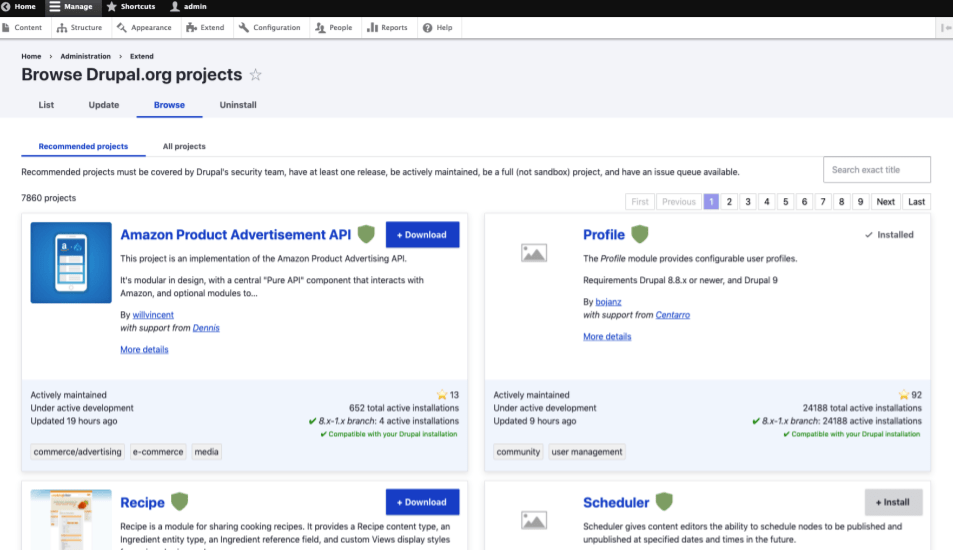 The tool supports authorization and permissions, so if an unauthorized user makes a request to get a menu, they will get back to the login link. Content creators can easily make updates to menus via the Drupal UI without a developer’s intervention. Their changes will be automatically reflected in a JavaScript front end. Developers can use their JavaScript framework of choice.

These tools are in great demand based on surveys held with Drupal users. They make it significantly easier for editors, website admins, and site builders to use the administrative interface. As well as they facilitate managing content and media and creating visually appealing page layouts.

One of the dream-come-true features for all Drupal users is to have their website able to update itself automatically. Everyone wants to be sure it is up-to-date and secure. The Automatic Updates Initiative has exactly this goal, and impressive work has been done about it. Package signing for better security, UX improvements, and testing with different hosting providers are major points for work yet to be done.

The feature is currently in the form of a contributed module but is planned for inclusion with the core. There were two options demonstrated by Ted Bowman for Dries’ presentation. The first one was for the module to have an on-demand core update option (which is otherwise not possible via the UI). The second option was for performing a core update to be available on every Cron run. This may include security updates only or all updates. 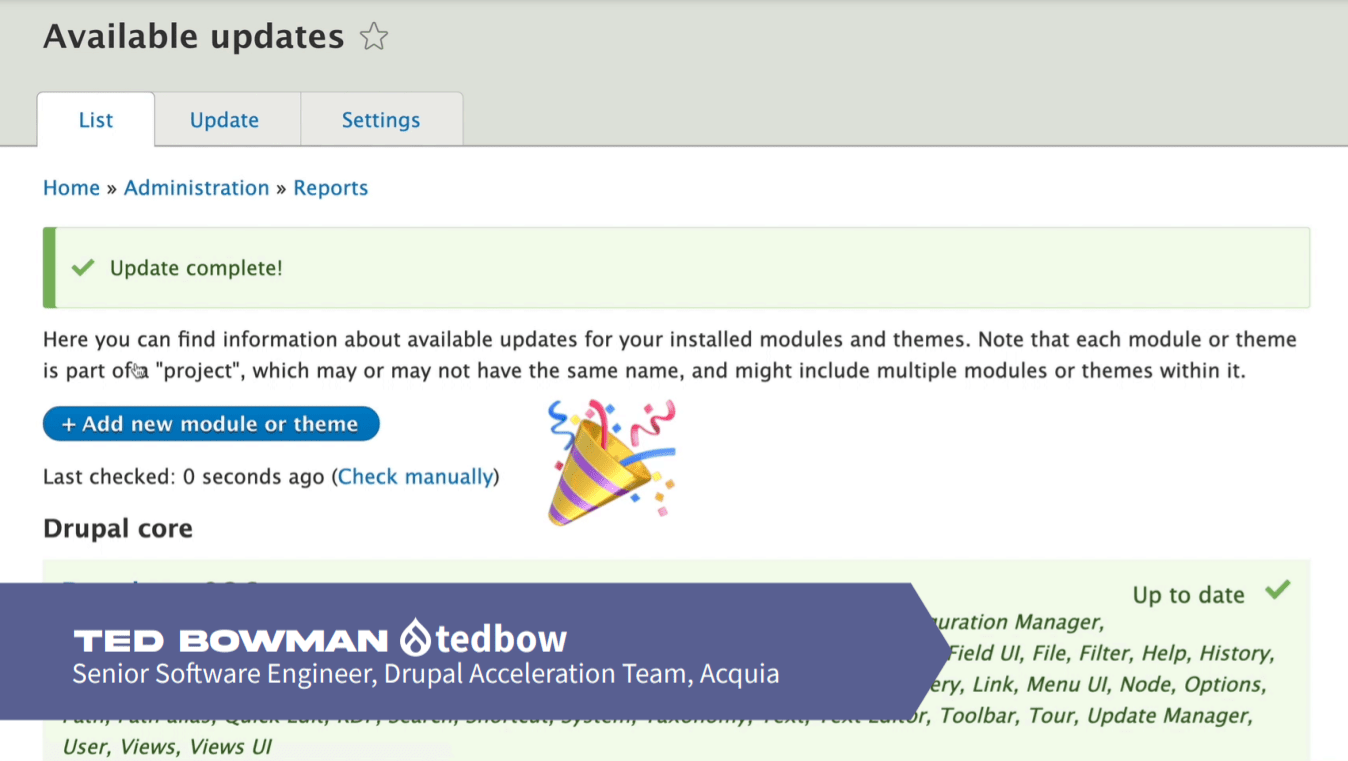 The new, super accessible, and modern Olivero theme is going to finally replace Bartik as the default front-end theme for Drupal websites. The theme even was appreciated by the National Federation of the Blind (United States). While helping the Drupal team do the accessibility testing, they admitted that Olivero was very well done and low-vision accessible. They could not find any issues with contrast, focus, or scaling. The forms were very well done and the content was easy to find and navigate. Dries emphasizes that the Drupal team has put great effort into making Olivero accessible in every detail. And the result is something to be proud of.

For over a decade now, it’s been possible to create a subtheme in Drupal based on the main theme. A subtheme provides the necessary CSS classes and markup. In Drupal 8 or 9, developers often use the core Classy theme for subtheming. Classy has been frozen since 8.0.0 because plenty of subthemes depend on it, and changes could break backward compatibility.

The reason is that, instead of inheriting changes at runtime, the generated themes will be forked from the starterkit theme at the creation time. This was an explanation provided by Lauri Escola at DrupalCon North America 2021’s Drupal 10 Readiness Initiative Keynote. With the new tool ready, Classy will become deprecated, but the support for it will not be removed.

As mentioned above, Drupal 8 reached end-of-life on November 2, 2021, and Drupal 7 follows it a year later, on November 28, 2022. End of life means the stop for official support and updates. Unsupported websites are more vulnerable to security breaches and are missing out on performance improvements and new functionality. That’s why it is recommended that both Drupal 7 and Drupal 8 websites upgrade to the latest version of Drupal 9. And afterwards Drupal 10 does come out, move effortlessly to it.

Why is Drupal 7 supported longer than Drupal 8? Whilst this may seem strange, Drupal 8 is reliant on Symfony 3 which has reached its end of life at the same time. Drupal 7 isn't using Symfony. So a decision was made to extend the support for the older version due to the pandemic challenges. Drupal’s creators are giving extra time to those organizations who are on Drupal 7 to migrate to a later version.

When it comes to Drupal 8, the upgrade to Drupal 9 is straightforward. It basically comes down to removing deprecated code and using the latest version of the core. No special efforts are needed, especially considering numerous helpful tools to automate the deprecated code removal. The scope of work will depend on the state of your website. When your core, modules, and themes were last updated and how much custom code you have that needs to be cleaned up.

Sign up and receive our monthly insights directly in your inbox!

Your Higher Ed Website is a Workhorse. Put Drupal at the Reins.